Since the 1980’s, I have been running colonies on double brood chambers, having realised early in my beekeeping career that the traditional single deep box offers too little brood space for colonies. Whilst this is common practice in much of the world, in the UK it is viewed with suspicion. Few realise how compressed colonies are in a single National brood box, resulting in excessive swarming. Instead, add more brood space and work with the bees rather than against them. I will discuss general management, swarm control, wintering, and the transition to double brood from a single brood or brood and a half.

Broadcast has ended. You may watch the replay!

You can still register and watch the replay! 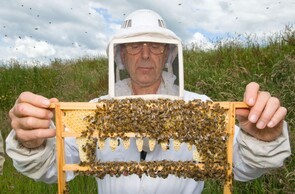 Ken was first introduced to bees at 6 years old, but began beekeeping upon graduating in 1971. He increased in numbers until running 150 colonies by 1979, running these as a semi-commercial outfit in parallel with his day job.

﻿Ken took his BBKA Preliminary, Intermediate, Senior, and Senior Practical certificates, before obtaining his National Diploma in Beekeeping (NDB) in 1996. During that time, he completed a wide range of beekeeping including stock selection and breeding from the best locally-adapted performers & extensive queen raising.

Ken has tried out most of the management techniques on large scale trials leading to ‘best fit’ tools and techniques for his own beekeeping environment.